The gender of a word is just a fact of the language, and native speakers of Romance (Italian, French, Spanish, Portuguese, Romanian), Germanic, and Slavic languages have a natural ability to attribute the right gender to any new word they learn.

For example, Italian babies are surrounded by the language long before they say their first word, so when it’s their turn to speak, they already know how the system works.

This word, system, is important in this discussion: the language is perceived as a system with rules.

Of course, native speakers of any language are in a much better position than those who learn a language later in life, but understanding the system and its rules can have a major role in the learning process.

The question you all are asking: is there a way to know if a word (noun) in Italian is masculine or feminine?

The answer you don’t want to listen to: no!

Well, this is the short answer, there are little things that can help though. So, we know that a language is a system (a complex system as far Italian is concerned!) and this means that if we decode its rules, things can be much easier.

Before going through some tricks you can use to understand the grammatical gender of an Italian noun, let’s try to be clear about why Italian words have a gender.

Time and usage play an important role in the development of Italian, but it’s the Latin origin of the language that can be more useful to understand the gender discourse.

Italian as we speak it today, has gone through a long process of adjustment from the original Latin. There are still many traces of Latin in the current language and we can say that at least two elements have greatly influenced the gender attribution process:

What does exactly “belonging to a semantic group” means? We can put words into groups according to their main characteristic, so, for example, a semantic group or category can be fruit, or rivers, or metals, etc.

Generally speaking (because there are exceptions, of course!):

As I said, there are exceptions. Especially words with a non-Latin origin or that have had a different development.

As a general rule (again, with exceptions) we can say that most Italian nouns ending in:

This is where both native speakers and learners start from.

There is also a group of words that end in -e and can be both masculine or feminine (singular), their plural ends in -i.

This is why sometimes it’s important not to stop ant the last letter, there’s more in the word that can reveal its grammatical gender.

The last suggestion I have for you is the most important though: a noun exists in a context. We can certainly read or hear a single word, but in most cases, we read or hear longer pieces of information.

Italian nouns are part of an agreement system, which means that there are elements in the language that change according to gender and number. And they all agree if they want to make sense.

A meaningful message is like a puzzle, the blocks can be small and numerous, or big and few, but they have to fit together in order to show the image. And like a puzzle, if one of the pieces is in the wrong place, it will not be ready to hang on the wall, but it will still be clear what it’s about.

Puzzle metaphors aside, if you make a small mistake and say “la mare” instead of “il mare” (the sea), it’s really no big deal because the context is there to clarify the meaning.

To wrap this up, my 3 tips to understand the grammatical gender of an Italian noun are:

DO THIS: when you learn a new word, don’t just add it to your glossary or vocabulary list. Write a sentence with as many elements as possible that agree with that name, like this: 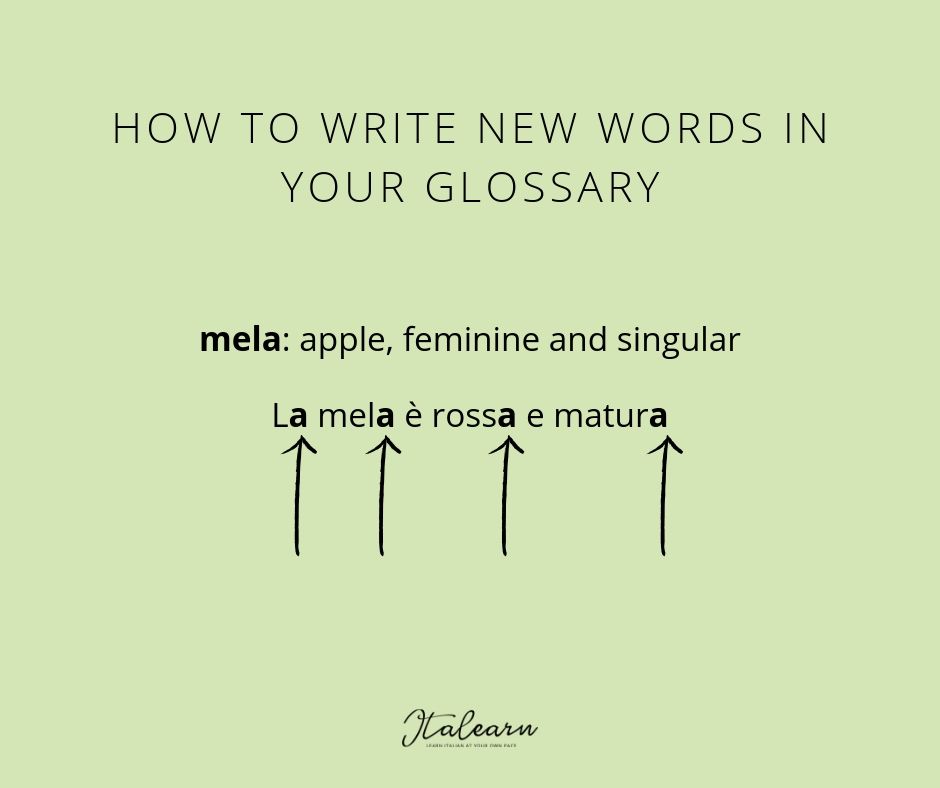 Do you want to read more about the gender of Italian names? I have 4 infographics about it on my Download page, scroll to almost the bottom of the page and click or tap o the images to download them.

I tell stories that nurture your love for Italian. Because a story is much more than just its language.

More on what I do here!

More from the blog:

Do you love chatting over drinks with your friends? So do we.
We’re Elfin, Barbara and Silvia and we meet up twice a month and talk about this and that. In Italian.